How a leading US law firm is using document automation software to create interactive websites that scale the reach and impact of their practice.

Greg Siskind is a founding partner of Siskind Susser PC, one of the leading immigration law firms of North America. He is also an early adopter of Afterpattern, a no code platform for building interactive websites that collect information, give advice, and automate documents.

When the US federal government creates a new immigration rule, you may find that Greg almost instantly has an app ready to help you navigate it.

We interviewed Greg about three of his most popular immigration apps (see below) and how he advises other law firms to explore the potential of converting their legal expertise into software products. 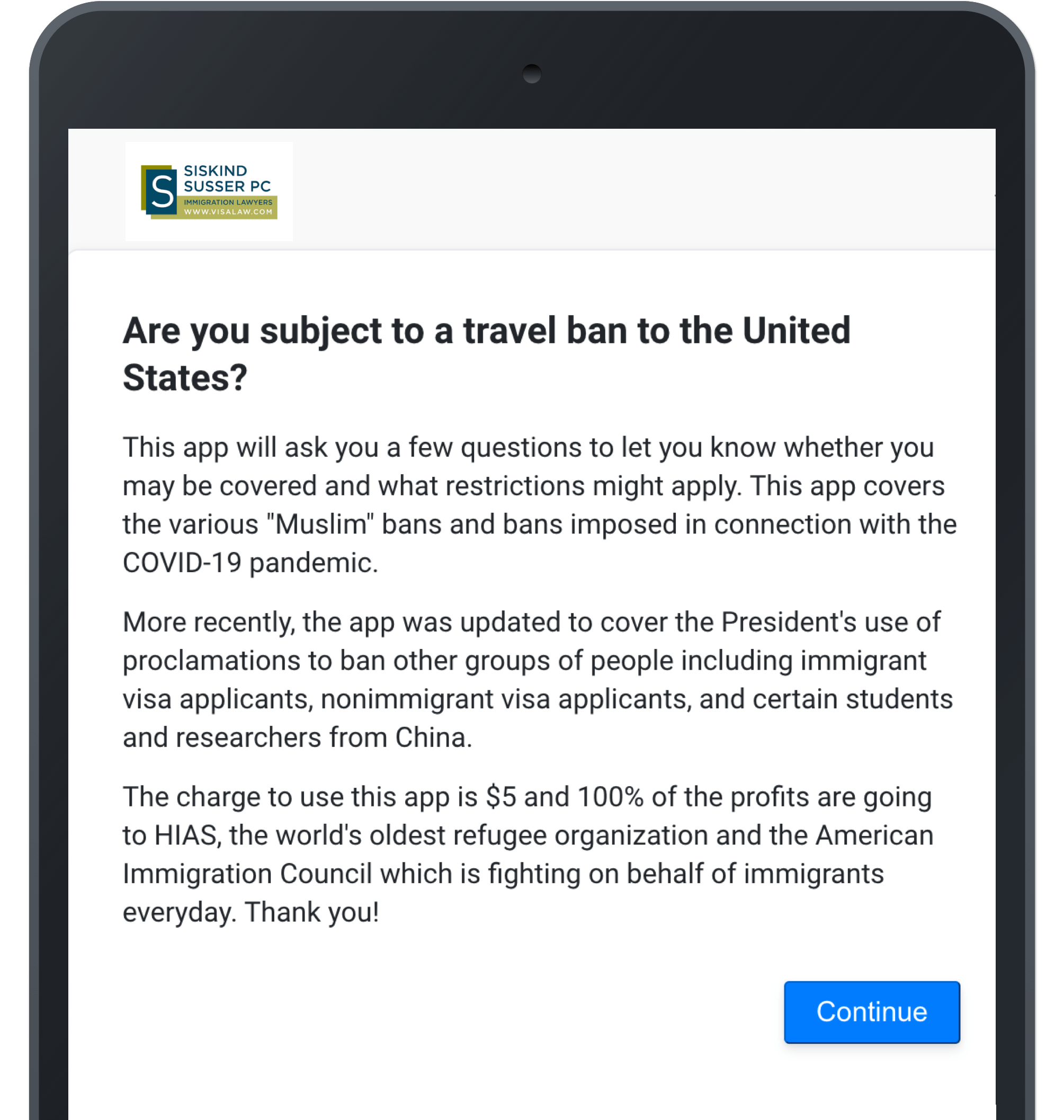 My name is Greg Siskind. I'm an immigration lawyer based in Memphis, TN. I've been doing this for 30 years.

We have clients all over the United States. Our practice [Siskind Susser, PC] is a full-service immigration firm, which means we handle everything from high net-worth investors all the way down to refugees and the clients that are trying to avoid removal. ‍

Could you briefly describe some of the legal apps you've created?

The background here is that the Trump administration imposed a new rule for how employers must calculate the wages owed to foreign workers. The rule was imposed without notice, rather complicated, and made drastic changes. All employers were going to be affected by it, so we decided to make an app that enables employers to figure out how, exactly, they were going to be financially impacted by this regulation.

We built the app to follow the formula provided in the regulation (the end-user of the app, the employer, answers a series of questions and the app spits out the wage they're required to pay their foreign worker). This is where things took a turn…

The Department of Labor eventually published a wage table. The figures produced by our App were supposed to match those provided in the government's wage table; but they didn't.

Initially, we thought the app didn't work. Our app essentially reduced the new regulation into computational logic, so we thought there was something wrong with the logic. But as we kept digging, we eventually realized that it was the government's wage table that wasn't complying with the rule.

We ended up filing a massive lawsuit against the Trump administration involving nine universities and 20 other plaintiffs (and we built another Afterpattern app just to help us onboard plaintiffs for this lawsuit). ‍

This app is a good example of how you can use technology to not only help people comply with the law, but also point out how absurd the law is in the first place.

This app relates to the so-called 'Muslim Ban' that the Trump adminstration imposed during its first week in office. This morphed into about 10 other types of bans on different people coming into the United States; some based on nationality, some based on the kind of visa you're seeking, etc. Every one of these bans works a little bit differently and sometimes more than one applies to your situation.

Initially, I wanted to build an app simply for myself and my staff. This App would allow us to answer some questions and then it would tell us which bans apply and what exemptions and waivers are available. This is actually how most of our Apps begin, as a tool for internal use; and then we discover that it's helpful for the public as well. I think you'll remember just how much demand there was from the public for this Travel Ban App.

Absolutely — The popularity of this app nearly crashed our servers. It also showcased how useful social media platforms can be for distribution as this App went viral on Twitter.

Let's talk about one more App.

I'm hoping this app doesn't have a long life because the 'public charge' rule is terrible and needs to go away. But in the meantime, it is very complicated, even for lawyers, to apply.

On February 24, 2020, a major new immigration regulation went into effect that subjects applicants for admission to the US and applicants for visas to much more stringent requirements in the demonstration that applicants will not become a "public charge". This app guides lawyers through all the requirements and provides analysis over how easily an applicant will be able to meet the new standards.

Thank you again, by the way, for responding to all my technical questions during that process. ‍

How do you identify an opportunity where a legal app would be useful? ‍

Another important factor relates to the choice we've made, as a firm, for how to onboard new clients.

We've learned that people are most comfortable calling a lawyer only after they're convinced that a lawyer is required. People don't want to call us and pay our fees only to find out they don't need a lawyer. So, over the years, we decided to do this analysis for free.

The problem is that this analysis is time consuming. Meaning, not only does it cost us money but it takes us a few days to get back someone.

This led us to try and figure out whether we could develop an App to do this analysis for us. Even better, the app might do the analysis and then, if the person qualifies for our services, collect the same information we'd normally collect in a first phone call interview.

We think this approach is going to fundamentally change the game in our field. Not only does this solve a huge problem for us (the cost of providing free initial analysis), but it should also make people more comfortable taking those first initial steps to engage with an immigration issue. For example, if it's not easy for a hospital to quickly discover whether there is an immigration issue, they may feel reluctant to even look at foreign candidates for physician jobs. ‍

Are you saying that people are more likely to hire a lawyer if they're able to triage themselves? ‍

Yes. Most people are intimidated by lawyers; this makes them reluctant to call without good reason. And look at how people make other significant purchase decisions, they start by doing research online.

Another reason why it's good for us to have people triage themselves is that it makes the first phone call so much more productive. If someone can use an app to reduce the spectrum of potential strategies to those they are interested in, we can spend the initial phone call actually talking about achieving their goals. ‍

After you identify an opportunity for a legal app, how do you transform a complex legal process into the type of logic flow required to make an app? ‍

As far as my personal preference, I like doing a lot of the work myself. That’s is why I developed the skill of building Apps for myself. Even if I have people in my firm who can build the apps for me, it's challenging to explain exactly what I want the app to do.

What I like about Afterpattern is that it allows me to get something straight from my head into an app.

In the end, I think building a legal app is complementary to a lawyer's skillset. The thought process you go through when analyzing a legal problem is not at all that different from what you do when designing an app. And it's enjoyable. I could do this all day long.

I should say that we have non-lawyer folks at the firm who work on app development with our lawyers and for some of our bigger projects, it makes a lot of sense to have this kind of help. In that case, process mapping is really critical. We use Lucidchart to map out apps and it’s a very user friendly, inexpensive product. ‍

How would you recommend someone get started with building Legal Apps? ‍

My advice to lawyers interested in building legal practice automations: the perfect time to build an automation is right after you finish a legal research project. In that moment, you know exactly how a rule works. You write a memo so that the next time someone in your office runs into this issue they know what to do, so why not build an automation?